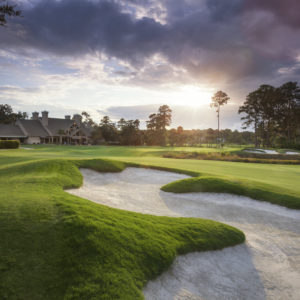 The Web.Com Tour comes to Savannah Georgia this week, for the inaugural Savanah Championship.

This event will be held at the Deer Creek course apart of The Landings Club.

Vancouver native Stuart MacDonald is a rookie on the Web.com Tour, who has competed in every event on the Tour this year.

“The course this is week is probably the best we have played this year. It’s in great shape and it has some distinct features to it that make it really cool” he said.

MacDonald also talked about the large swales around the greens at Deer Creek, which will cause players to have to be accurate with approaches this week, or they will be putting or chipping up to the green.

This was highlighted on Twitter by American Kyle Thompson, as he showed how fast they were rolling.

Going into this week MacDonald has made one cut at the El Bosque Mexico Championship where he finished T34.

When asked what he can carryover from last week in Louisiana MacDonald looked at his putting.  “Last week I saw a few putts go in and the stroke felt quite nice so I’ve definitely gained some confidence on the greens going into this week” he said.

MacDonald tees off Thursday at 1:15, he is paired with Daniel Mazziotta and David Berganio, Jr.